July was a rather good month where I am up a little over 110% for the month of trading. After struggling for the first two weeks I was able to increase my equity steadily and without any drawdowns. 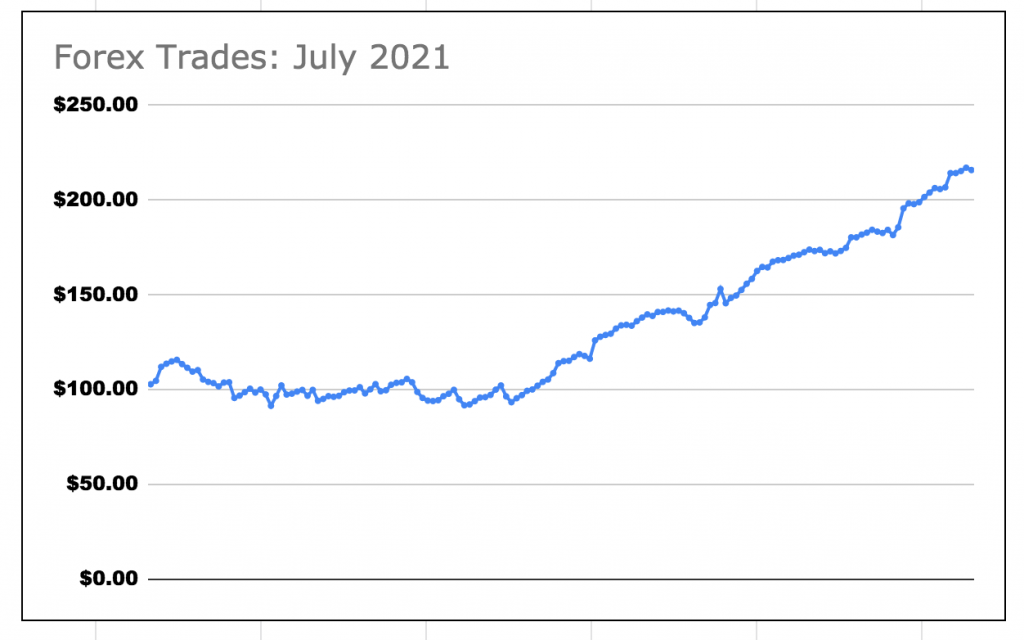 Out of 159 Trades I was able to win 114 with just 44 losses and one breakeven. My average losses were still slightly higher at 2.52 $ than the average amount while winning 1.99 $. The difference makes up around 25% which is significantly less than the 200% I incurred with my old trading style and strategy. Considering the fact that I do usually trade without stoplosses this is remarkable (or just lucky).

I am happy about my top3 ratio. The sum of my biggest three trades on the winning side and the loosing end for the month amounts as follows:

The number of scheduled trades in comparison to adhoc trades is growing and making better profits as well as those trades working with Keltner Chanel movements.

Goal for August 2021
I am looking to continue trading my new concept. I do want to create less trades and work to reduce the total trades to a number of less than 100 by adding more scheduled trades and getting rid of most impulse driven jumps into the market. The impulse trades happen to be winners, but rather small.

The biggest losses are created with trades where I have no plan for an exit and sometimes with impulse trades after averaging in. (They happen a lot more with GBP crosses on a side note) An old weakness of mine that I am working to overcome. Yeah, averaging into a loosing position is really a big accelerator for losses not need to be.

Most importantly I do want to raise the average Dollar amount of winning trades to around 5$ per ticket and keep the median for losses at below 4$. This will be difficult to do, but it will be the key to long term success. Winning ration alone just won’t cut it.